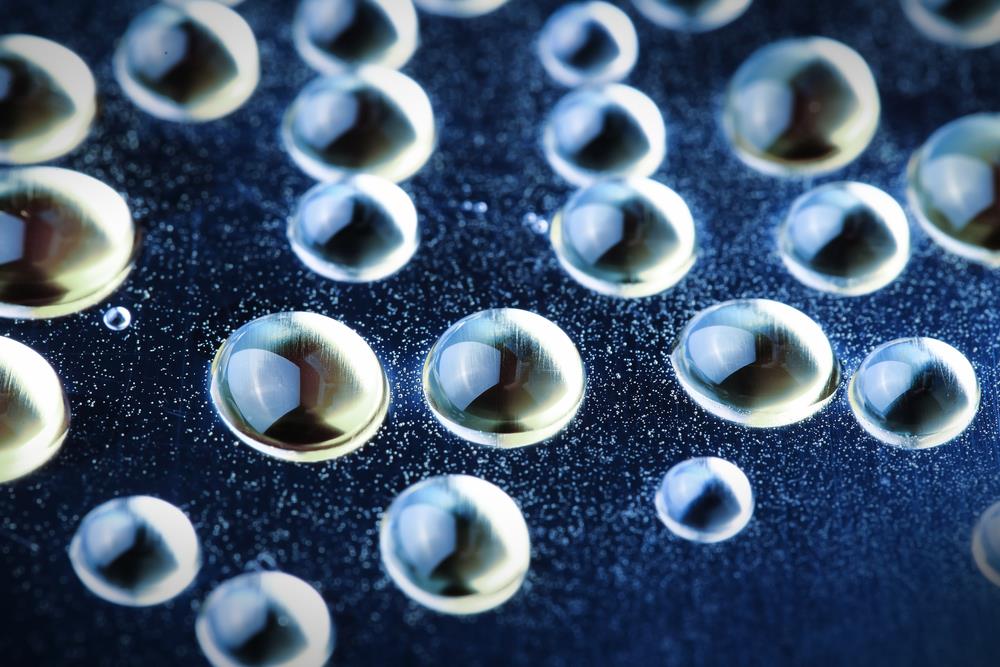 THE LIMITS OF RADIOTHERAPY

Radiotherapy combined or not with chemotherapy and surgery is one of the main therapeutic treatments against cancer. Approximately 60% of cancerous patients receive radiotherapy during their treatment. One of the main challenges of radiotherapy is to provide a sufficient dose in the tumor while sparing the surrounding healthy tissue.

Today, during radiotherapy, we find that healthy tissues are also affected by radiation. The challenge is to maximize the effectiveness of radiotherapy in cancerous tissue while limiting the destruction of healthy tissue.

These nanoparticles contain derivatives of silica and gadolinium atoms. They have an average size of 5 nanometers (30,000 times smaller than the diameter of a hair) allowing them to pass the tumorous blood-brain barrier to reach the cancerous tissues.

The gadolinium atom has two important characteristics. On one hand, its magnetism allows better imaging MRI, and on the other hand its high atomic number allows it to interact with the X-ray beam. The double effect of this active element positions AGuIX® as a theranostic drug, that is to say, both of diagnosis and of treatment.

AGuIX®, a contrast agent and a treatment accelerator

AGuIX® is a nanoparticle designed to have three key actions against tumors: targeting, imaging and treatment.

AGuIX® penetrates and resides in tumor tissues, but not in healthy tissues, thanks to a difference in porosity between the vascular networks of the two types of tissues. The size of the AGuIX® nanoparticles is then sufficiently small to allow a deep penetration into the tumor tissues, but nevertheless high enough to ensure retention in the same tissues

2. AGuIX® improves the location of the tumor

Once the tumor has been targeted, AGuIX® behaves as a contrast agent for MRI to improve the location of the tumor during MRI and to delimit the tumor precisely.

AGuIX® plays a key role in radiotherapy. Combined with radiotherapy, AGuIX® amplifies the radiation efficiency locally in the tumor. This technology can treat radiation-resistant cancers and minimize the side effects of radiotherapy by decreasing the exposure of healthy tissues and the level of radiation.

AGuIX® technology is based on the use of ultra-small nanoparticles with hydrodynamic diameters of about 5 nm. This smaller size than conventional nanomedicine used for drug delivery is designed for rapid renal clearance avoiding the toxicity problems usually associated with nanoparticles stored in the liver.

5. A simple method of administration

The method of administration of AGuIX® is extremely simple since it is an intravenous injection before the first session of radiotherapy. This does not change the current working methods for clinicians. The same injection can make it possible to carry out both MRI and radiotherapy, a few hours apart.

Preclinical proof of concept in vivo was obtained by international teams (Lyon, Grenoble, Boston, Belfast, Paris ...) on 6 different models (cerebral metastases, lungs, pancreas, head and neck ...): nanoparticles A 5 nm size) passively accumulate in the brain tumors, allowing their detection by MRI, as well as a significant improvement in the survival of the animals after irradiation. They are naturally eliminated from healthy areas.

AGuIX® technology is protected by 4 international patents and its effectiveness has been demonstrated in more than 50 scientific publications.

NH TherAguix has recently reached a milestone in the development of advanced products with the completion of the production of 1000 vials of AGuIX® and the successful validation of the toxicity and stability tests required by the ANSM (regulatory authorities).

The first injection "in man" was carried out in July 2016 at the CHU of Grenoble. Currently, 2 doses, carried out on 3 patients per dose, made it possible to demonstrate the good tolerance of the drug by the patients and its favorable biodistribution.

In imaging, the first results are extremely promising since even at low dose, contrast is observed in all patients, with a remanence at 1 week in 3 patients / 5.

Regarding radiotherapy, 4/5 patients responded to the overall treatment and there is already a first correlation between metastasis contrast and response to treatment.